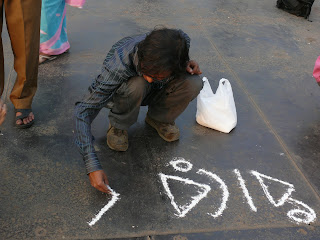 Recently while talking to the group of “Performers independent” in Kolkata, I started another public art project. At Babughat, the most famous historical ghat of river Hoogli (Ganga), in Kolkata, I started writing a sentence with white dust colors. An appeal, a request, a plea or a line of poetry: Let’s sit a while on the bank before the river dries up. 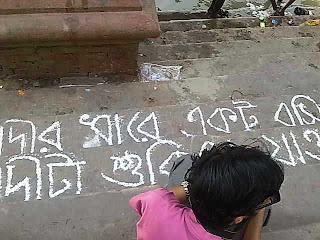 When I was in a field visit and research in interior parts of Assam in recent past, while observing the protest scenario against the BIG DAM on Brahmaputra, while facing the big big turbines on the 52 National Highway across the Sonitpur District the most striking but quite expected news came to notice: the mighty Brahmaputra is drying up to scale never before…
I was spending my one year in Baroda, my second year of MVA, on the bank of river Vishwamitri. That was a dead river. 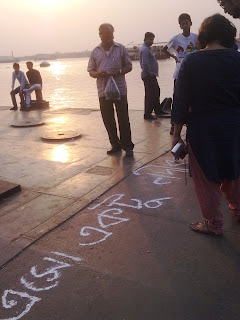 One of my favorite songs, “Nodi mathon boy, kaloiko noroy…” Loosely translating: “a river only keeps flowing without waiting for anybody else, who is there to stop its journey? One who has love for the sea, will just go and embrace the sea …” However, the lyrics is proven wrong. Perhaps at the time of composing the song the composers were not aware of the BIG DAMS. The international policies. The conspiracy of the states. 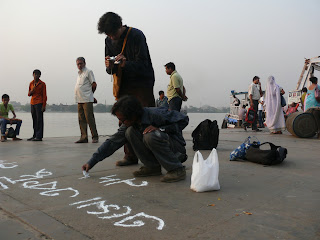 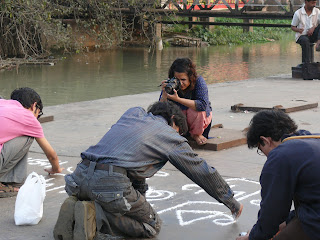 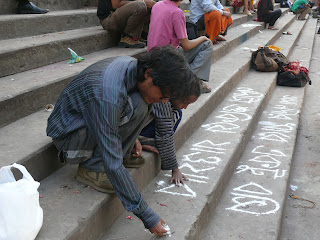 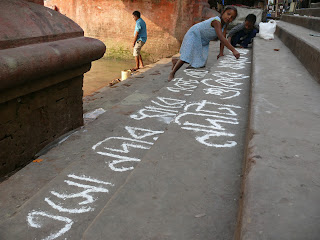 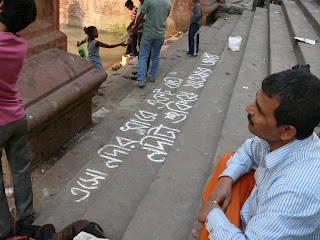 The mighty river Brahmaputra remains the backbone of the culture, economic resource, biodiversity and identity for the people of the land called Assam. The most celebrated personalities from Assamese culture and literature Bhupen Hazarika and Indira Goswami aspired recently. Both of them were the greatest lovers of all the times and the river Brahmaputra was the source of inspiration in their entire lives. However, news came up: the river Brahmaputra is drying up!!! 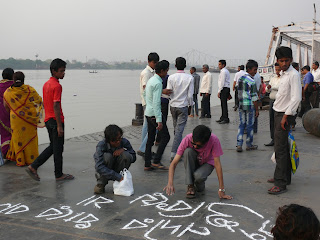 On 12th March, 2012, I wrote the sentence in two places. One on the staircases of Babughat. The other on the ferry platform near to Babughat. 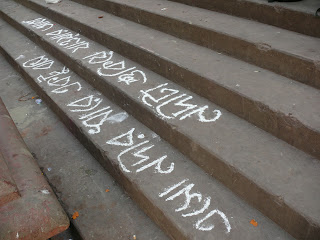 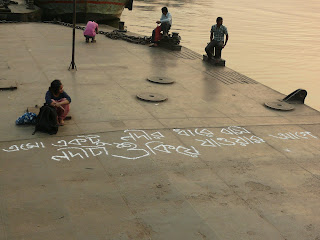 While writing the sentence on the steps at Babughat two children came up with helping hands. They enjoyed the act of writing with dust-colors, and moreover they brought some colors from us to continue the activity in some other places. 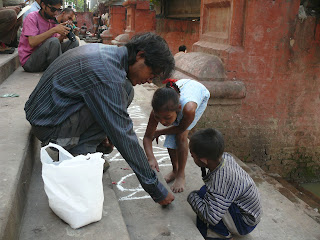 While writing the sentence on the platform of the ferry ghat, suddenly a ferry came and stopped by. Many people came and went by. It was nice to see how people were protecting the sentence from their footsteps. It was also noticeable, how people were commenting: some conceived it as a poetry. Some argued: why are you writing this like an “alpana”, it will vanish in a while. Rather you could paint with a permanent paint… and so on. 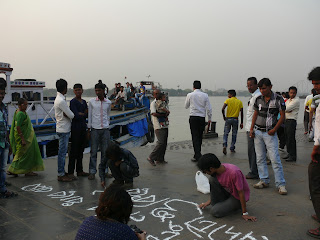 All the members of Performers Independent, including Syed Taufik Riaz, Rahul Bhattacharya, Amitabha Adhikari, Dhrupadi Ghosh, Suman, Chirantan and others were participating the event. Amitabha Adhikari was capturing the moments on his drawing book.
Posted by Samudra Kajal Saikia at 12:45 PM